Pumpkin Pie Spice is perfect for Fall baking and beyond. It's a blend of warm seasonal spices: cinnamon, ginger, nutmeg, allspice, and cloves. A flavorful combination that will make your cookies, bread, pies, and cakes taste just delicious.

There's something special about Fall. Nature's beautiful colors, the smells of fallen leaves, cold mornings touched by frost, and warm afternoons bathed with the sun. I'm excited about this time of year because of the obvious - pumpkins. But also because of the sweet-scented spices swirling around my kitchen.

The most popular spice in the kitchen right now is, obviously, cinnamon, followed by aromatic ginger and strongly scented cloves. It's an overture to the Christmas season, and I absolutely love it.

But the most used spice BLEND in the cabinet is definitely a Pumpkin Pie Spice. The fragrant combination of cinnamon, cloves, nutmeg, ginger, and allspice. It's a great addition to seasonal drinks, desserts, and treats.

It's aromatic, sweet, and perfectly scented. Filled with Autumn flavors and the perfect addition to autumnal moods outside. But this Pumpkin Pie Spice mix goes beyond its taste. It is filled with spices that possess many health benefits too.

To make a Pumpkin Pie Spice blend, you'll only need a few simple spices that you probably already have in your spice cabinet.

How to make Pumpkin Pie Spice

Store in a cool, dry place for up to six months.

Pumpkin spice has many uses beyond pumpkin pie. This warm combination of autumn spices can be used in sweet and savory dishes. Here are some most popular uses:

Don't forget, this spice mix is very flavorful so little goes a long way when using.

What is pumpkin pie spice mix made of?

What is a substitute for pumpkin pie spice?

For 1 teaspoon pumpkin pie spice, substitute: ¾ teaspoon cinnamon + ¼ teaspoon ginger + a dash of allspice, and nutmeg, with just a touch of cloves.

Apple pie spice is made of cinnamon, nutmeg, allspice, ginger, and occasionally cardamom. Pumpkin spice includes a combination of those ingredients except for cardamom, but the key difference between the two is that pumpkin spice contains cloves.

What is the difference between pumpkin pie spice and gingerbread spice?

While pumpkin pie spice is heavy on the cinnamon, gingerbread spice has a more balanced combination of cinnamon, allspice, and ginger. 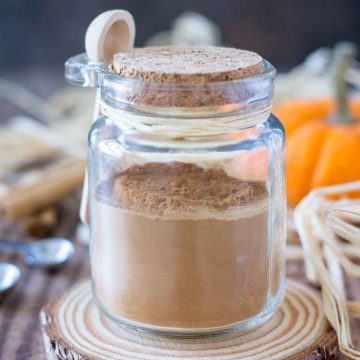 Natalie is a writer, recipe developer, and creator of Natalie's Health. She combined knowledge of nutrition, diet and exercise and specialised in developing healthy recipes and writing about a healthy lifestyle. Her recipes and articles have been featured in many popular media outlets, like Shape, Greatist, Pure Wow, Mashed, The Huffington Post, ELLE Magazine, and many more.

Hi, I'm Natalie, a foodie passionate about health and wellness. I have combined my knowledge of nutrition and diet to specialize in developing healthy recipes. On Natalie's Health, you'll find many such recipes and tips on how to live a healthier, happier life. I'm so glad you are here! Find out more about me.